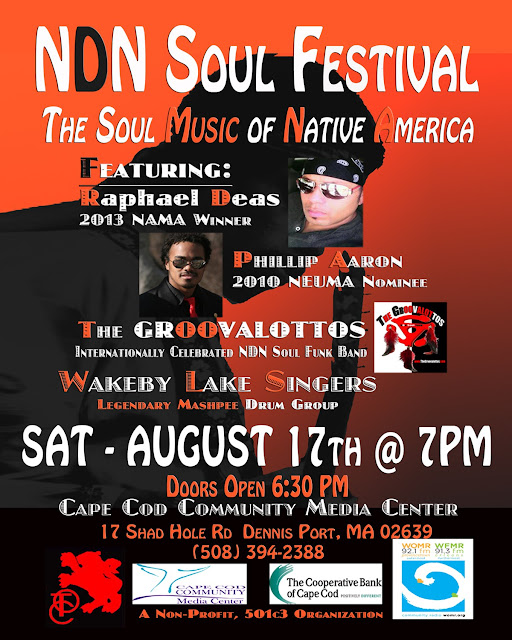 Without Question, this will be one of the best nights of live music on Cape Cod!!! The NDN Sou Festival will be a live televised concert of some of the best soul, funk and jazz acts in contemporary Native American Music; including 2013 Native American Music Awards winner, and radio personality Raphael Deas; Soul singer extrodinaire and 2010 New England Urban Music Awards Nominee, Phillip Aaron; Internationally celebrated, Spirit Wind Records recording artists, The GROOVALOTTOS; and Legendary Mashpee Drum and Singing group Wakeby Lake.

This is a show not to be missed. August 17th @ 7PM at the Cape Cod Community Media Center, 17 Shad Hole Rd, Dennis Port, MA

To be continued...
No comments:

I was at the All Access Music Conference in August of 2012 and one of the things that struck me was
this: as a producer in a room full of music producers, why is it a novelty that I produce real bands and real band recordings? The music business migrated to an electronica, direct input production system in the 1990's. As I sat at the conference and listened to the interviews with the top producers of today, who all worked off of a single beat machine and sampler, it was proof positive that popular music had de-evolved.  As the panelists listened to my tracks, most were impressed with the fact that I had real band recordings in with my electronic works; while some felt that I was doing 'meaningless production work' and should have sampled and looped the instruments.

Fast forward to when it came time to producing a recording for The GROOVALOTTOS, it became time to throw the lessons learned from working in the music industry in New York out of the window, and make an album the actually captured the magical essence of the band, over a bland, sterile and predictable cookie-cutter record as the industry requires. To make this album I had to reach back into an older bag of tricks...  Trying to figure out how to approach recording this song is the trick. I'm going to have to skip over every rule that the industry tried to teach me ten years ago about the 'new sound'. For one thing, we're not making a pop  record. Drum machines, samplers and beat machines are not the root of this project.

I decided to share my journal from producing the album in the hopes that it might inspire other bands and producers to return to creating recordings as opposed to making them. A basic blue-print to making a commercially viable, band recording. QuestLove, Spike Rebel and I should not be the only Soul/Urban/ R&B producers under 50 who know how to do this... Perhaps these notes will be another way for The GROOVALOTTOS to make the musical world more interesting. So now, onto the process...

Part of the mystique of The GROOVALOTTOS has been their ability to gain gigs and a following on pure buzz, with a couple of demos floating out in the Soundcloud and Youtube universe.

The advent of the beat machine and electronic with time correction and pitch correction making music 'perfect' or perfectly sterile to be more precise; the truly organic band recording has become an extinct element. Drummers and bass players, rhythm guitars and backing vocals have become sampled a looped elements; along with sequenced keyboard parts and 'auto-tuned' leads are the stuff records are made of.

The GROOVALOTTOS being a rather self-contained musical force, with singer, sonmgwriter and keyboardist, Mwalim DaPhunkeeProfessor being the seasoned producer of the crew, took on the ardous task of capturing the raw, organic, funky essence of one of Native America -if not America in general's- greatest bands. This is a story that takes us into some of the best recording studios in Southeastern, Massachusetts, with some of the best soul, funk, blues and jazz players in the country, with one of the greatest producers and musical minds in the business.