Upstart Cable and Streaming Network UBC-TV hosted a Pre-Grammy Launch that featured Grammy Nominees The GroovaLottos, along with a host of up and coming Indie talent, got the crowd going.


Packed to capacity and The GroovaLottos are two phrases that we're hearing in the same sentence a lot these days. The 'Road To The Grammys' continued with an appearance on Tuesday night at a Pre-Grammy Launch party at Taj II in Manhattan, hosted by UBC-TV, a brand new cable network in New York City. A who's who of the urban music industry gathered to enjoy a celebration of the launch of UBC-TV as well as hear some of the best indie talent in the business today. Topping the list was an appearance by The GroovaLottos.

This was also an opportunity for the industry to meet percussionist, MC and soon-to-be solo artist, The Z.Y.G. and talk about his upcoming project. Up until last night, The GroovaLottos were simply a legend in the New York music scene, to those familiar with their Grammy nominated album and unapologetically old school soul sound. Quickly gathering new fans, the group sold handfuls of CDs and collected a bag full of business cards.

The GroovaLottos will be in concert with folk-jazz band, The Louis Apollon Band on January 27th at the MMAS Arts Centre @ Great Woods, 888 South Main Street, Mansfield, MA.

Keep up (if you can) with The GroovaLottos by becoming a member of The Phunk Squad. Membership is free. Just visit the link below:
http://tinyurl.com/phunksquad
No comments:

Dedham Square Coffeehouse was packed to capacity and the windows were covered with steam from the dance floor. The GroovaLottos kick off mini tour with a true party. Next stops: Taj II in New York City, and MMAS @ Great Woods in Mansfield, MA.

If you weren't at the Coffeehouse Soul Sessions on Saturday, January 20th, you truly missed, what has been described as a party and a revival. The GroovaLottos had the suburban eatery packed to capacity, with the dance floor full most of the night and a lot of the food and beverages sold out. CDs were sold hand over fist and people lined up to sign the mailing list. It's the kind of night indie bands dream about and the kind of night that The GroovaLottos have been experiencing more and more.The premiere of Soul Sessions as a monthly offering at the Dedham Square Coffeehouse, in Dedham, MA was an amazing event and the kick-off of The GroovaLottos 'Road To The Grammys' mini tour.
This coming Tuesday they are bringing their party vibe to Taj Lounge II, 48 West 21st St, NYC for the UBC-TV Pre-Grammy Kick-Off Party. There the band, their Grammy nominated song, "Do You Mind(IfWeDanceWitYoDates)?", and the line dance 'The Phunk' will be featured at the party and on the New York Cable show. The party starts at 6pm.

Saturday, January 27th, the band will be in concert, with international folk-jazz sensation, the Louis Apollon Band at the MMAS Center for the Arts @ Great Woods, 888 South Main Street, Mansfield, MA. Show time is at 7:30 pm.
Coffeehouse Soul Sessions will reconvene on Saturday, February 10, 8pm at the Dedham Square Coffeehouse, 565 High St, Dedham, MA.
Join the Phunk Squad and stay informed on the activities and events of The GroovaLottos:
http://tinyurl.com/phunksquad
No comments: 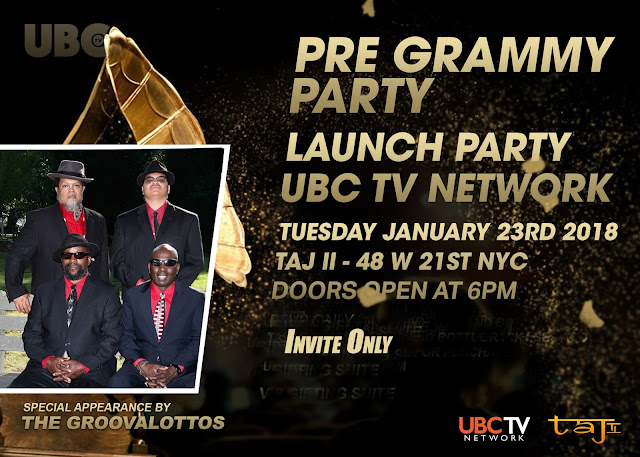 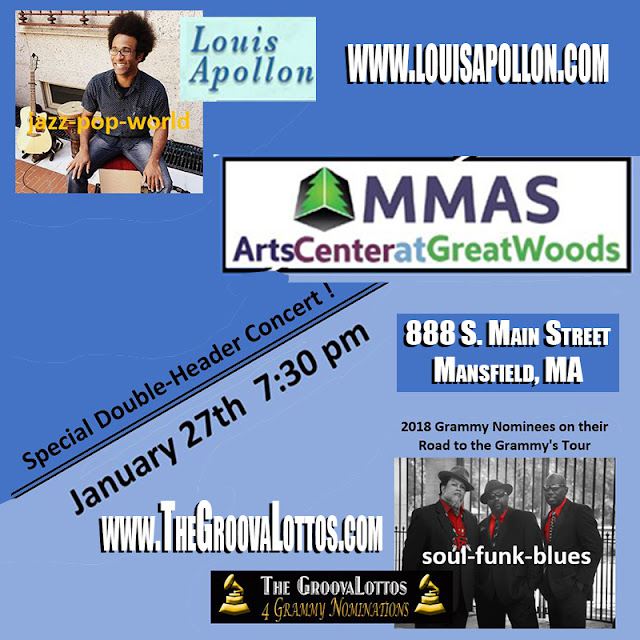 Congratulations to VS J.R. Native and the Artist To Watch Tour 2018 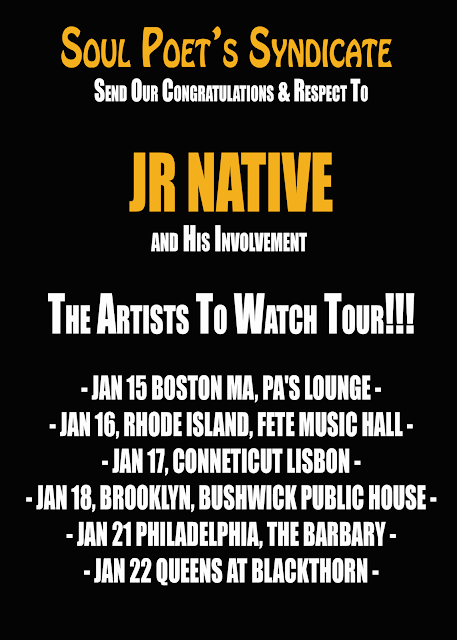 Surviving That First Gig: A Chat with The GroovaLottos About Their First Show

It was a cool March evening in Falmouth, Massachusetts when The GroovaLottos made their debut in 2011. It was also the night that they invented their 'Mash' songs.

"We had been jamming in the carriage house for almost two years and sounded pretty good," recalls Mwalim DaPhunkee Professor, "I had brought in a digital recorder and we even made a demo of about 4 or five songs."
"The only thing," added Eddie Ray Johnson, "was that all we knew were about 4 or five songs... completely. We also knew a couple of Mwalim's originals; but otherwise, we barely had a complete set. The next rehearsal, Mwalim casually mentions that we had two gigs coming up, both on the same day."On March 12, 2011, for the first time, The GroovaLottos loaded their instruments into their vehicles and unloaded at the Tilden Arts Center of Cape Cod Community College in West Barnstable and made their public debut at the Multicultural Arts Festival. "That was only a 25 minute set, so we were fine," recalls Eddie Ray. Later that night, they unloaded at a pub in Falmouth, did soundcheck and went out for a bite before the 10pm gig.

"All through dinner, Jamie and Nick were stressing about our lack of songs to fill a gig that ran from 10pm to 1am. To add to the pressure, the Cape Cod Times had placed us as 'Pick-of-the-Week' for the weekend, so folks were going to come hear us," laughed Mwalim. While Jamie Wolf had been a session player for Motown in the late 1960's, as well as a touring blues player, usually fronting his own bands; Mwalim and Eddie Ray had also been touring and session players and Mwalim relied on some incite that the late, great Atlantic Records promotions man, Clarence Bullard, "If you know four chord progressions, you know 4 million songs." Also having backgrounds as jazz players, they were able to insert solos and shift feels of the songs to stretch them out.

"We were able to make it through all three sets, using the same chord changes several times and just changing the arrangement, words and melodies,"added Eddie Ray. "Between the 12-bar blues, the 'Shake It Up Baby' chord changes, and 'Ain't Misbehavin' chords, we were able to play tons of soul, blues, rock, and pop tunes by Michael Jackson, Led Zeppelin, Barry White, Curtis Mayfield, Muddy Waters, Charles Wright, and The Isley Brothers," explained Mwalim.

Here we are, almost seven years later and the band has a set list of over 200 songs, over 30 of which are originals, including the tunes on their Grammy nominated debut album, "Ask Yo' Mama". Even their cover tunes are distinctly 'GroovaLotto', soaked in their signature soul-funk-blues style.

UPCOMING Shows with The GroovaLottos:

A New Year and The GroovaLottos Spread The Phunk Movement Internationally

A landmark 2017 for The GroovaLottos lays the foundation for a powerhouse band and production unit that is stepping into 2018 full steam ahead with Triple A radio play, rising album sales, and the Coffeehouse Soul Sessions.


Opportunities and accomplishments have been a growing pattern for The GroovaLottos, as we look back at the last two years of the bands rise from regional bar band to indie music legends; and from indie music legends to internationally recognized musical masters. When a band has visitors from other states and other countries making a special trip to hear them at Gilda's Stone Rooster in Marion or the Dedham Square Coffeehouse outside of Boston just to hear an up close taste of what they've seen snippets of on Facebook or were blown away by the album and wanted to hear if the live came close; only to be even further blown away.
"Mwalim and I usually play Gilda's as a duo. One night, a lady came up to me at the break," explains drummer Eddie Ray Johnson, "and gushed about how great we are and how amazing it was for two people to produce such a big sound. Her accent was not from around here. It turned out she was from Belgium, had heard us on Youtube and was visiting a friend in Stoughton and made them bring her to Marion to hear us. she and her friends bought seven CDs from us." Similar things have happened at other gigs, where visitors from other countries made a GroovaLottos show part of their tourist-in-America experience.
Currently appearing on the RMR Charts as well as the Jamband and NACC charts, "Ask Yo' Mama" is in rotation on over 250 station, specialty radio shows, and podcasts in the USA, Canada, Europe, Asia and Africa. In August, they were album of the week on BBC.
Keepers of the Soul-Funk-Blues traditions, The GroovaLottos continue to carve a niche for themselves in the Americana music market. Upcoming performances include Gilda's Stone Rooster on January 13 @ 9pm (27 Wareham Rd, Marion, MA) and Dedham Square Coffeehouse on January 20 @ 8pm (565 High Street, Dedham, MA).
Want to keep up with the band? Join The Phunk Squad:
TO JOIN THE PHUNK SQUAD CLICK HERE
No comments: