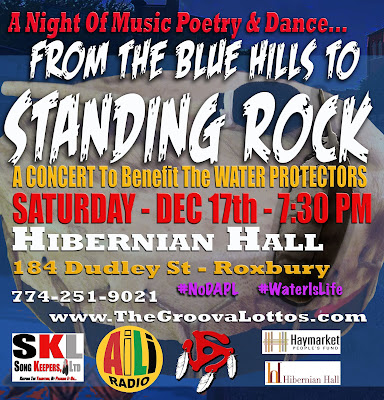 ROXBURY, MA - "From The BLUE HILLS To STANDING ROCK" is a benefit concert in support of the Water Protectors at Standing Rock, featuring an internationally acclaimed bill of traditional, soul, funk, jazz and world-music indigenous performers.On December 17th at 7:30 pm in Hibernian Hall, 184 Dudley Street in Roxbury. The donation is $15 and advanced tickets are available on eventbrite: (https://www.eventbrite.com/e/from-the-blue-hills-to-standing-rock-benefit-concert-tickets-29517413378)

Confirmed performers include: Mixashawn Rozie, Terry Orlando Jones, Phillip Aaron, In Divine Company, Bojah & The Insurrection, AREA Twenty-Two, Robert Peters, The GroovaLottos, and more! This concert is being organized by Song Keepers, Ltd in conjunction with several other community organizations, in support of the Water Protectors trying to prevent the North Dakota pipeline from passing through the reservation water supply which violates a 170 year-old treaty between the USA and the tribe.

Song Keepers, Ltd (SKL) is a non-profit, professional arts and education organization, dedicated to the preservation and continuation of traditional and contemporary Native American music; as well as community engagement and social and economic development. SKL was formed by a collective of Native American musicians and singers out of a recognized need for social and educational activities in the community. We do this by developing and supporting community based educational programs and presentations of music and the performing arts, by and about First Nations people.