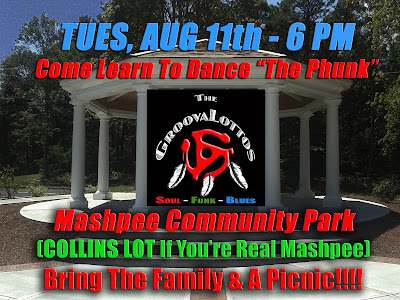 MASHPEE - The GroovaLottos makes a stop in Mashpee Community Park on Tuesday, August 11 at 6PM as part of the Summer Concert Series sponsored by the Arts Foundation of Cape Cod and TD Bank. The concert is free and open to the public, who is encouraged to bring a picnic supper and enjoy the evening.

Winners of the 2015 Silver Arrow Award for the Soul Music category, and finishing their first album at MDI Studios, the band has had an active summer of regional touring, with shows throughout the cape, as well as Boston, the South Coast, Rhode Island and Connecticut. Recently headlining the Onset Beach Jazz Festival and touring with the Cultural Survival Arts Festival, The GroovaLottos will be headlining the Boston Jazz Fest on August 29th along with jazz singers Pat Braxton and Rebbeca Parris.

Their July 4th alcohol-free concert and dance drew a diverse audience of people who danced all night to the soul-funk-blues grooves of the band. They are now looking into making the dances a monthly Song Keepers event.